Today was the official opening of the Engelandvaarders museum in an old bunker, once part of the Nazi’s Atlantic wall.  Our jolly king did not let the weather bring his spirits down and had no trouble putting himself second to give the amazing volunteers and veterans that made this museum possible a moment to shine. 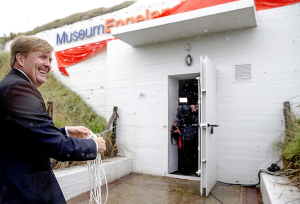 All though I might need some more time to come up with a decent blog on this topic, I did want to post this today, also in response to The Daily Post’s writing prompt: “Generation XYZ.”

You see, this new museum in Noordwijk is both a tribute to those who gathered up all their courage and decided to risk their lives to make freedom possible for themselves and the rest of their countrymen and -women during WWII as it is a reminder to younger generations that every single person can play a role, take a stand and make a change!

Silence in the face of evil is itself evil: God will not hold us guiltless. Not to speak is to speak. Not to act is to act.

And as far as I’m concerned it’s not any deity that you are accuontable to, it’s all of us. It’s society. The world. Mankind. Give it whatever name you want. Show you know right from wrong, by speaking up against injustice or malice. You’ll see you’re not alone. Be inspired and inspire others. We can do better than this.

Quoting Kid President: What will you create that will make the world awesome?

2 thoughts on “Museum to make the world awesomer”