You know how every country has its ultra-common lastname, that half the population seems to have? The cliches like Smith in the Anglophone world, Nguyen in Vietnam, Lee in China, Jansen in the Netherlands or Rodriguez among Hispanics.

Well, despite being a South American country, Bolivia is a bit different in this respect (all though Rodriguez is still up there in the top 5 somewhere). The indigenous population is a decisive factor here, making names like Quispe, Choque and Mamani extremely common as well. 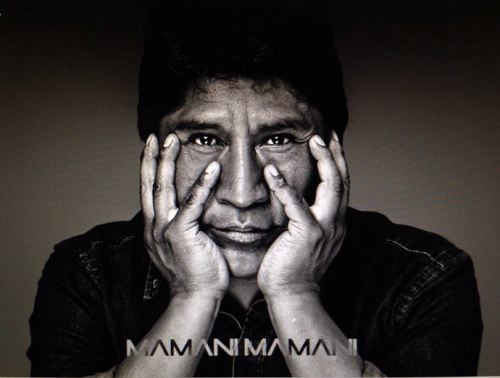 One particular man called Roberto, presumably with both a mother and a father with the last name Mamani, is who I want to introduce to you today. Roberto is an artist, best known as Mamani Mamani.

His art is colorful, fun and childlike, but at the same time so very complicated it might make your head hurt. I go back and forth trying to decide if I would want to hang a (replica of) a painting of his in my home some day and right now my answer would be a full hearted yes.

Take this one, for example: 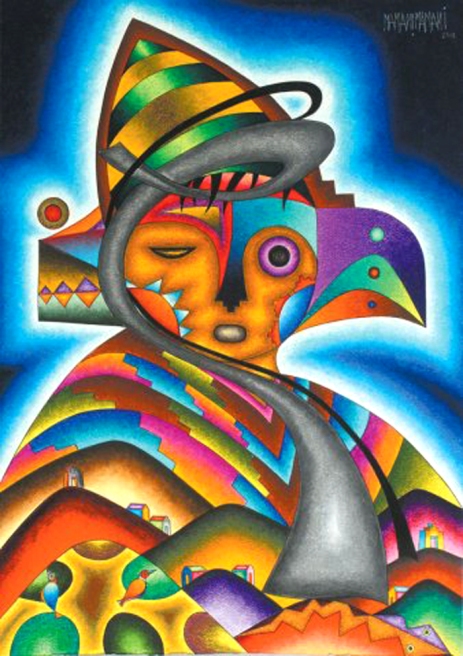 I can only imagine what a piece like this must look like up close, without being handicapped by pixels or color muddling digital screens.

It’s a man, it’s a mountain. It’s the flora, the fauna and the cultural essence of the Bolivian highlands; all in one. The colors clash with each other in perfect harmony. It captivates me so that I can’t help but embark on an instant daydream, up that winding road straight to its core.

It’s actually quite strange as anybody who’s been to the Andes knows that the highlands are not exactly the most colorful places on earth. At the same time, these depictions feel completely accurate to me.

Because my promise to publish five easy-to-digest light topic blogs is proving to be a bigger challenge than I thought, I have resorted to Daily Prompts to find inspiration.

I agree, it’s kind of worrisome that I have very little trouble thinking of half a dozen topics to write about when it comes to my personal annoyances, petty opinions and the state of the world but go completely blank when requested to write about something optimistic.

So, like many people who don’t know what to say, I am going to be talking about the weather.

Soooo, the winter is crazy warm on this side of the globe….. El niño sure was strong this year, huh?! 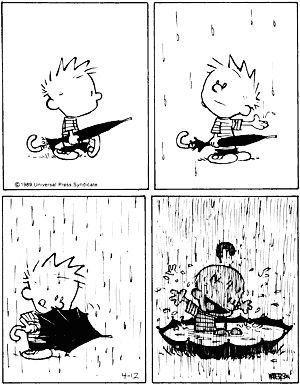 My dad is actually a big fan of the weather. He would always whisper to me as a kid to be silent for a minute and listen to his friend….

…. the wind, whistling past our house. And the rain; oh how he loves the rain! The rain is a blessing that we must be thankful for. Also, it’s the perfect time for a walk, provided that you have the right coat / a change of clothing with you. Feel its rhythm, smell its earthiness and see how nature reacts to its arrival; you are alive!

It sounds quite romantic and idyllic now but you can imagine I wasn’t quite as charmed by his eccentric ideas as a teenager. Imagine being dragged away from your favorite TV show to go walk around in the mud during an autumn storm… Not so amusing, daddyo.

But yah, I actually love it nowadays, all though I still get a little cranky when the cold gets into my bones and the skies are grey for weeks on end.

When I hear people complain about the weather though, I usually can’t help but remind them that there is no such thing as “bad” or “ugly” weather. All you need is the right clothing and a bright attitude.

Oh and maybe some hot chocolate.

We all have them, those songs and artists that we hate to love and love to hate; they’re our guilty pleasures.

Sobby latino songs, Miley sing-a-longs, Rihanna rebel songs, Christina bootyshakers, Nickelback nanana-rock, Gaga-marches; ah yes, there is a time and place for all of these (which is usually around midnight and behind closed doors, curtains and windows :p )

So which songs would make me blush the hardest getting caught singing and dancing along to? I can feel it coming in the air tonight: it’s a list!

This perfectly dramatic song can get terribly on my nerves when played on the wrong moment but when it hits me right, oh my poor neighbors!  Ahora quiiieeeeeeeeeeeeen?

Like many of the fans that were with her from the very start, I was disappointed at first when Shakira started selling more sex than music. When she sings in Spanish, she still wins me over every time though and this song in particular… OK, I’ll say it: I Love it!

Despite finding this guy kind of gross and the fact that I have no clue what he’s singing, my knees and shoulders can’t help but twitch, bob and rock when this songs comes on.

My love for this song brings me back to high school angstiness, which pretty much gives away my approximate age, doesn’t it? Anyhoo, turn it up, here are the Guano Apes!

I never really made up my mind about what I really think of Eminem. I’m always excited to hear new songs of his but don’t really listen to him much all in all. His apparent anger and ultra-specific lyrics always make me feel a strange mix of sympathy and pity. This one song however, is just really kind of cool and encouraging and great to scream along to in the car!

This videoclip always mesmerizes me. It makes me feel like such a terribly arythmic, unflexible, good-for-nothing white girl… which is actually pretty accurate… My goodness, look at what those hips can do! And not just that, it all moves independently of each other too! Amazing… and the song is so catchy too!

The next one I have trouble admitting even to myself. It’s a song by a Dutch folk singer, now deceased, but legendary for the tears he forces down grown men’s cheeks, especially after a couple of beers. It’s one of those songs that the whole pub sings along to whenever it’s played. The song’s title means “Blood, sweat and tears”, which pretty much says it all. Also, it’s the title of the bio pic about Andre’s life.
I am most definitely not a fan, but yes I know it by heart and will channel all the inner pain I have in me to sing it the way its s’posed to.

Have a good Friday!

Sarrah from a neighboring WP-blog, aptly called Bringer of New things, introduced me to the idea of doing a monthly “Mind Cleanup” and I’m really looking forward to working with it!

I imagine some strong-built little figures in overalls will be deployed into the crypts of my chaotic mind and will have a go at the mess down there. At first they will use their heavy duty tools to clean out the biggest chunks of nonsense. They will dump this down a chute, leading to a furnace where the nonsense will be burnt to fuel new thoughts. 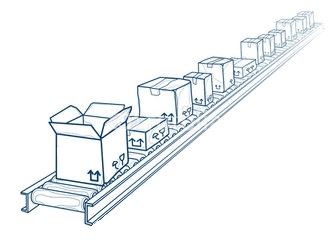 Then, they will proceed with more subtle shovels and brooms. They will carry out boxes of stuff that might be worth saving and will hand these to the next group. They might use a conveyor belt during the sorting process, organizing my thoughts into subcategories and keeping the real good stuff aside for the soft-hands-and-keen-eyes-crew.

The unfinished thoughts with potential to bare fruit will be labelled and put on shelves. After all this is sorted, all the hard working helpers in my mind can sit back and look at the results of their labor, in satisfaction. Of course the whole place will be a mess again in no time, but for the moment all is swell!

So, let’s see, if I were to just pull out a couple of drawers here and there, what would my first mental cleanup reveal?

Good news
This morning, when I was sitting in the train on my way to work an older man sat beside me and kept peeking over at me. I thought he wanted to ask me something so I took out my earbuds, but he said nothing. I kept feeling his glance though and finally, as I stood up to leave the train he told me: “I can’t help but look at your ears. They are so small! It is a sign you have a good computer, I mean up there! It is a sign of intelligence and I know these things!”

Bummer / Bad news
The beekeeping course I wanted to apply for, scheduled to start in the Spring of 2016, is already full!

Music
This morning (yes, it was an eventful commute) I heard the radio guy say he thought Justin Bieber’s “Love yourself” was one of the best songs of the year…. O.o Really?! What I think of when I hear this guy sing “Cause if you like the way you look that much, baby you should go and love yourself” is threefold:

Capitals
During a brief trip abroad last weekend I saw a departure announcement with destination to Podgorica. I had no clue whatsoever where that might be, and luckily neither did my travelling  companion. Apparently it’s the capital of Montenegro. Apparently I don’t have such a good computer up there after all…

And that’s all I’ve got for this round. Yes, this is going to work quite well for me, I think!