As I was watching TV just now, switching from channel to channel like a 21st century zombie, I came across the following commercial:

It’s a public announcement from the Dutch 4th & 5th of May-committee, that starts out by reminding us we had lost our freedom during 5 years of World War II. The voice over continues by saying that since then, we have passed freedom on from one generation to the next. It’s something that should not be taken for granted and something we are responsible for, together. She finishes off by telling us that on the 4th of May we will be remembering the victims and that on the 5th we will celebrating our freedom. Her final question is: “How will you pass our freedom on?”.

It was only three weeks ago that I wrote about the Dutch national remembrance and celebration day, and the confused guilt trip I have been going through in the wake of it. But while I was watching the above commercial I felt I hadn’t said all I needed to say.

You see, as so many other places in the world, Dutch society is no longer succeeding at hiding it’s true (pretty racist) colors. Some of you may have heard of the discussion we’ve been trying to have about our family friend, “Black Pete”. If it rings no bells, feel free to read an old  blogpost of mine about it.

Some of the same people that are trying to ban Black Pete from the Dutch celebration of Saint Nicholas, have been trying to ask for a more equal representation during the May 4th remembrance.

The point they have been trying to make has to do with a lot of things, but the one they have been speaking about most is the role of the Dutch army during the Indonesian National Revolution, which took place between Indonesia’s declaration of independence in 1945 and the Dutch recognition of its independence at the end of 1949.

During the two minutes of silence that we hold at 8PM every year, we remember all victims of WWII during the first minute and victims of other wars in the second minute. According to the protesters, we only focus on “white victims” and choose to ignore the victims in Indonesia, for which the Dutch conscience is not completely clean. 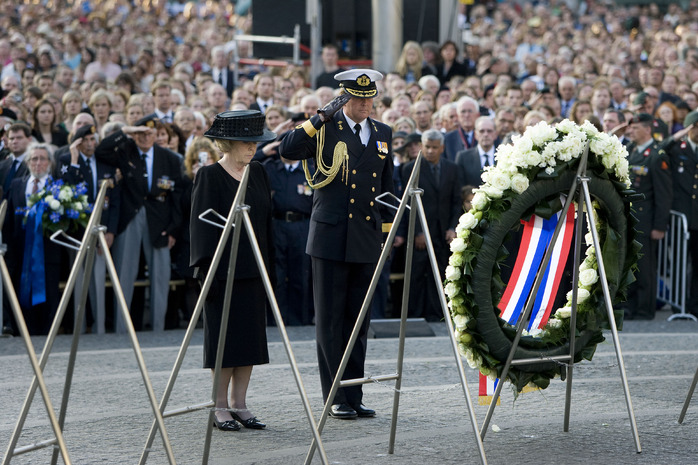 A couple of weeks ago, this group of protesters announced they would disturb the two minutes of silence with a noise-demonstration to bring attention to their cause.

Politicians have tried being civil, saying: “If you are protesting to demand respect, you shouldn’t start out by disrespecting others. There is a time and place to discuss and demonstrate, but this isn’t it.”

Just like with the Black Pete discussion though, there was a small window of opportunity for society to defuse the bomb before it went off. You see, the right reaction to a person telling you that you hurt them with something you did (or didn’t do), in my opinion, is: “Really??? I made you feel that way? I had no idea and I am so sorry! Please, join me at my table. Let’s talk.”

I know, I’m naive that way… 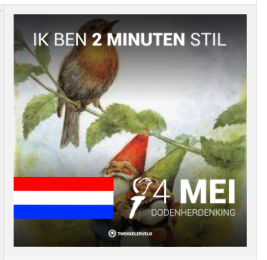 But I’m seeing friends on Facebook (yepp, I’m still there) putting frames on their profile pictures showing the Dutch flag and stating “I will be silent for 2 minutes”.

For most, it’s probably just a well-intentioned attempt to pay their respects to the dead. It bothers me though, because it’s so much beside the point that I don’t know whether to laugh or cry.

So in their stupor of petrified ignorance my fellow countrymen are only achieving one thing: proving the protesters right.

Ironically, this year’s theme is “resistance” so we are all being encouraged to stand up for what we believe is right. I think the people that came up with the idea were hoping we would be standing together AGAINST racism, though…  wupps.

It will be exactly seventy years ago this week that the second world war officially ended in the Netherlands.

The 4th of May is Herdenkingsdag, or Remembrance Day. On this day we all do a conscious effort to commemorate the cruel history of war, to realize once again what men are capable of when exposed to hateful doctrines and to honor the people who did not survive. Poems, speeches and solemn music help us get in a contemplative mood that suits this day of mourning.

At 8PM, we are all silent for 2 minutes. Cars stop by the side of the road, all TV and radio channels adjust their programming, cities go quiet, children study the faces of their parents and try to understand the sudden change of atmosphere… And then the national anthem is played, smiles reappear and life slowly picks up again. 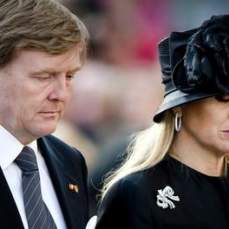 I always wonder what other people think about in these two minutes. There are no real rules about this (luckily!) all though I always ask people around me what they will focus on during the moments of silence. You can steer your thoughts in all directions during those quiet moments but I’m quite sure most of us try to keep our thoughts relevant. That is to say, we think about the second world war; about the destruction of Rotterdam, about the underground resistance, about the concentration camps and the millions that died. But we also think about more recent wars and conflicts where military force was used and soldiers met their deaths, – our soldiers, their soldiers, guerrillas, civilians.

A few years ago there was some controversy because the annual poem that was chosen to be read aloud  (always written by a child) was dedicated to the boy’s grandfather, who had joined the SS and was therefore, as we call it in the Netherlands “fout”, which translates to “wrong”. The poem was about making choices and how these choices can echo on in future generations. The poem is a sort of reminder that in times of war things can get confused and one must not judge too quickly.

This caused so much upheaval that in the end, the Committee decided to pull the poem out of the program. The wounds are still too fresh to forgive. There is no room to grieve for the men that stood on the wrong side of the line, at least not on this day. I do understand this sentiment even though I think it is valuable to stay open for the fact that there is always another side to the story.

The sad realization is that in the end it makes no difference. No battles are prevented or stopped by the strength of our quiet thoughts and next year we will do it again and we will have more death to think about…

…but to not end on this somber note I will also tell you about the 5th of May, which is Bevrijdingsdag or Liberation Day. On this day we celebrate our freedom by dancing in the streets, as the people must have done in 1945 when the Nazi occupation was officially over.

What will you do on the 5th of May?