It took me a while to get this list together and I still feel it’s incomplete, but since the blog that inspired me is already six months old, I think it’s better to just throw it online and then see what happens later.

Lyle describes how she realized that some of the songs that were good when they first came out but had now passed their expiration date and should really be retired and never taken out again. 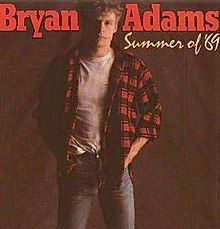 There are so many songs that I feel the same way about, but one that I really can’t wait for to disappear into oblivion is Summer of 69 by Bryan Adams. It’s not that I got sick of it. I never really liked this song. But for some reason some of my friends keep sharing it on playlists and acting like its something I should feel melancholic about. I don’t.

The summer of 1969 weren’t “the good old days” for me, nor any of my friends. Our parents maybe; but then again, Bryan Adams means nothing to them.

The rest of my list consists of the following six songs:

There were also two artists that I dislike in general and would like to request to leave the stage and find another occupation, being:

In the case of Bon Jovi, I think probably don’t hate all of their music. The song that really really really gets to me in all the wrong ways and has ruined their whole repertoire for me, is the slow version of It’s my life. I would crash my car (or bicycle, taking into consideration I don’t actually have a car) if it came on the radio while driving and I wouldn’t be allowed to switch the channel…

Sam Smith is talented, I get that. His voice is…. interesting? But he sings like he’s constantly running out of breath and that high pitch thing he does… Good grief, please don’t.

On the other hand…

Have you guys seen the animated movie Sing? Nothing can move a grown-up to tears quite like a kids’ movie can, amirite?

Last weekend, while visiting my parents I put on some music on their way-too-high-tech audio system and motivated my dad to cruise through the wondrous world of YouTube.

My daddio goes through phases of extreme innovation and radical conservatism; wanting to be ahead of the rest with the newest-of-the-newest technology and gadgets on one day, and only wanting to purchase things from “people you can look in the face and shake hands with” on the other. Sometimes both at the same time. It is possible. But it’s confusing sometimes. To me, I mean. To him it makes perfect sense.

Anyhow, my dad was going on a fanatic musical-melancholy tour through YouTube, watching old Rolling Stones and Bob Dylan footage and was about to go into his “they just don’t music like this anymore”-rant. Luckily, I came prepared and presented him with First Aid Kit, the wonderful Swedish duo that can restore your faith in humanity and modern day music in one sitting.

Oh, how I hope to get the chance to see them live some day. I’ll be heading to Roskilde festival again this year… Fingers crossed…

You know how every country has its ultra-common lastname, that half the population seems to have? The cliches like Smith in the Anglophone world, Nguyen in Vietnam, Lee in China, Jansen in the Netherlands or Rodriguez among Hispanics.

Well, despite being a South American country, Bolivia is a bit different in this respect (all though Rodriguez is still up there in the top 5 somewhere). The indigenous population is a decisive factor here, making names like Quispe, Choque and Mamani extremely common as well.

One particular man called Roberto, presumably with both a mother and a father with the last name Mamani, is who I want to introduce to you today. Roberto is an artist, best known as Mamani Mamani.

His art is colorful, fun and childlike, but at the same time so very complicated it might make your head hurt. I go back and forth trying to decide if I would want to hang a (replica of) a painting of his in my home some day and right now my answer would be a full hearted yes.

Take this one, for example:

I can only imagine what a piece like this must look like up close, without being handicapped by pixels or color muddling digital screens.

It’s a man, it’s a mountain. It’s the flora, the fauna and the cultural essence of the Bolivian highlands; all in one. The colors clash with each other in perfect harmony. It captivates me so that I can’t help but embark on an instant daydream, up that winding road straight to its core.

It’s actually quite strange as anybody who’s been to the Andes knows that the highlands are not exactly the most colorful places on earth. At the same time, these depictions feel completely accurate to me.

The time of the year has come that Guns n Roses legendary song is played on the radio more frequently. It killed me when I heard some channels choose to stop the song before its climactic second part (let’s call it the funeral part). That’s usually the part where I crank up the volume just a tad more, for that final climax!

Anyhow, I realized that this is a song that is very rarely covered, even in these cover-crazy times… I looked it up to see if perhaps I had missed some talented garage band giving it an honest try, but there was really nothing noteworthy. I did see a bossa nova re-do which should never have happened and some guitarists giving it their all, but with no vocals.

I know this song may be most loved for its guitar solos but come on! The background vocals in the beginning, the heart wrenching guitar-vocal team up at the end. Isn’t there anyone who dares give it a go? Is it that holy? Or is it that hard? Or has it become that uninteresting….?